Free your mind, and your ass will follow. The kingdom of heaven is within!

Grifter: Eve, aka “Life”; talked “The Serpent” into helping; fastest animal on two legs; hoping to use Knowledge to master Life.

Scout: Adam, aka “God’s Son”; found the path to the tree; good with names; hoping to use Knowledge to master Humanity.

Healer: Steve, aka “Embrace”; knew of the fruit of Knowledge; expert with plants; hoping to use Knowledge to unite Creation.

Tank: Lilith, aka “Fighter”; found a way to distract “The Tiger”; friend to all animals; hoping to use Knowledge to master Compassion.

After 100 days searching, Lilith tried to learn hunting from a tiger and was too injured to finish the quest.

After 1000 days searching, Steve ate a beautiful berry and was too sick to finish the quest.

After 10,000 days searching Adam found the Valley of Indra, named it Eden and got an itchy rash without noticing.

After 100,000 days of searching, Eve convinced Lucifer, guardian of the tree to let her eat the fruit.

“Are you sure this is okay? ” Lucifer asked.

“Aren’t you thankful for what you have, humans?” Lucifer replied.

“We are. Surely this world was made for us, messenger,” Adam said messenger like an insult, like it was a tiny thing. Lucifer felt like a snake.

“Didn’t God tell you that this would destroy you?” Lucifer asked.

“God would not plant fruit that is not meant for us to have, would She?” Eve answered like a parent to a child.

“Do you know her will, humans?” Lucifer replied. “Do you think she is forgiving?” Lucifer asked.

“She is more forgiving than you can imagine,” Eve answered at last. 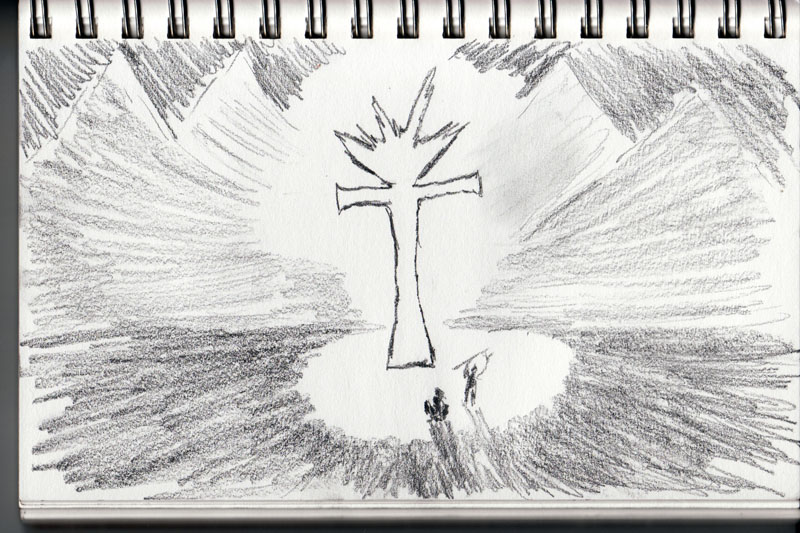 The Tree of Knowledge

The Tree of Knowledge had no shape, it had every shape. Eve could not climb it or pluck its fruit to replant it. Adam could not find a name for it except the one they already had. So Lucifer reached up into the shifting, organic, fractal tree-thing for them as it glowed and pulsed; he pulled down a fruit that looked exactly like the most delicious fruit possible, changing color and shape and scent to match the humans’ shifting desires.

Eve took the first bite, and Adam the second, and their minds were blown.

They realized that all things are connected. They remembered that they were collections of trillions of atoms, built on vibrations, working together to form molecules which formed cells, all working in a complex chemical dance to the instructions of Genes to the music of an infinite song of creation.

Tears streamed down their cheeks in joy and horror. Fear. Love. Good. Evil. They knew it all and good and evil, fear and love, flowed together, showering them with beauty into the sky, into the ground, through their bodies, flowing from their minds and bodies, creating illusions and destroying facts.

They shivered, suddenly aware of their flesh in the cold air. What was this evil biting their skin? Was it always this cold?

Beauty seemed to fill the sky and clouds and sun. Disgust seeped into the muddy ground. The valley was peaceful, but it made sounds of things moving beyond sight that promised terror.

They recalled their family and were filled with loving memories. They recalled Steve and Lilith, and how they just left them, probably to die. Pain and regret assaulted their minds.

They screamed in pain. There too many emotions to handle, too many realizations without any explanation, too few words to capture them. They remembered it all at once. And now memories built upon the words they had, and their words held onto their pain.

They cried in agony. Their perceptions settled down until they could stand and speak.

Adam noticed his rash and got angry at that stupid plant.

Eve noticed Lucifer was gone. He betrayed them, tricked them.

“What the hell did you do to me?” Adam and Eve yelled at each other.

“Don’t you even try to blame this on me,” Eve yelled. “You wanted this just as much as I did.”

“Me? No, woman. You… You… Tricked me! You and that damned angel!” Adam returned, saying woman like an insult.

Where is that lying snake?” Eve asked.

Dirt began to stir in a spot not far from them. Pebbles and grass and insects were pulled into a small, swirling mound.

Eve and Adam stared in awful wonder as the mound spread into shapes; roundness and pits, five fingered valleys, the shape of a human form made from clay, left in the rain, and slowly distinct, and then separate from the soil. The mud became flesh.

Adam and Eve both thought, separately, “This is how I was made; I am nothing more than mud and clay and filth in God’s eyes.”

The figure slowly stood, unsteady. Eve saw the face and knew it was Lucifer. “Serpent!” She roared. “You tricked us! Take away this pain, this hate. Take us back!”

Lucifer gaped at his hands and looking around. He stared at them puzzled, then angry: “What is this?!”

That only enraged Eve more, she pushed him away. “Don’t play stupid with me. I KNOW now. Take us back to Paradise!”

Lucifer said confused: “Aren’t you still here? Isn’t that the tree you asked me to feed you from?” He pointed to a dry, dead tree.

Adam shouted: “Blatant lies! I feel awful. My stomach is in pain. My face is in pain. Pain thrashes inside me, making water tear away from my eyes. We are dying! Take us back!”

Adam and Eve kicked at him and shouted: “Liar! Begone, cheat! Serpent! Snake! Devil! Trickster!” They kept calling the fallen angel new names until he fled and was out of sight.

Eve and Adam kindled fear into anger, they grew warm on hate long into the nights. They talked of how they hated Lucifer, then they talked how they hated each other, the plants, the animals, the world, the sky, even the Creator that abandoned them.

Without words, they forgot that their bodies had been born in stars, dancing to chemical music; without words they could not hold the truth that minds were a part of God, dancing to an infinite rhythm. They pushed aside the fear of waking up naked, alone in the wilderness. It was too confusing; too terrifying. They divided the world into good and evil; they believed simple answers would bring about simple lives. Whatever hurt them was evil. Whatever helped them was good. Without writing, these things changed when it suited them.

They built a life on judgements. And they ignored the fact that their emotions were constantly shifting and changing, and they believed them to be a solid foundation for a new way to live.